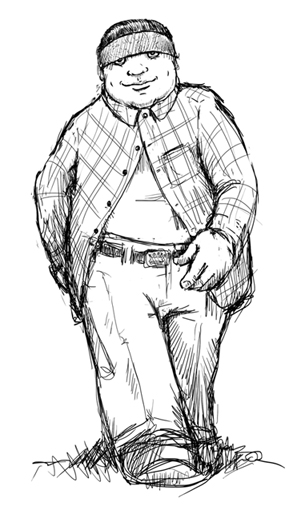 Hector wanted to look tough. With his hair slicked back, the bandana low on his forehead, the pressed chinos and the plaid shirt buttoned at the neck, he was the poster boy of cholo severity. But no matter how chingón he dressed, Hector had a face like the Pillsbury doughboy. Regardless of his mood, he was always smiling. To compensate for his cheerful countenance, Hector did everything he could to boost his cred and prove what a badass he really was.


In fourth period wood shop at Keppel High, I watched Hector run circles trying to impress the homeboys in class. He was non-stop talking shit, bragging about the many heinas he’d banged, or the five Sangra locos he took on all by himself. Everybody knew he was a wannabe. But since his uncle was a bigshot in Lomas, doing time for attempted murder at Pelican Bay, they played along.
I was in no position to judge. I was the only whiteboy in shop class, and with my baby face, I looked like I'd wandered into Keppel from Emerson Elementary by mistake. But even though I kept my distance, I was on the bottom of the totem pole and an easy target.
The verbal taunts started at the beginning of the semester:
“Hey, güero. Weren’t you at the bowling alley last night?”
“No. What are you talking about?”
“Oh, musta been somebody else. You whiteboys all look the same to me.”
Hahahaha.
It was all fun and games until the day I walked into the class just as Hector turned the corner and shoulder blocked me. Not expecting the sudden impact, I fell backwards.
Hector sniggered into his fist as he sauntered away. “Sorry, holmes. Didn’t see you there.”
At first, I couldn’t  gauge the sincerity in his apology, since his perma smile was the ultimate poker face. So I let it slide. But a few weeks later, I was about to take my seat in class when Hector pulled the stool out from under me. I grabbed the edge of the work table just before my ass hit the floor.
“What the fuck?”
“Oh, were you gonna sit there?” Hector asked in a high-pitched mocking tone. “Sorry.”
“He’s punking you, ese,” Sergio told me as we shared the belt-sander. “If you keep taking his shit, you’ll be his bitch all year.”
Sergio had a point. It seemed like I’d always been in the crosshairs of one mental midget thug after another. Back in elementary school, I got picked on so much I had to start running fifteen seconds before the final bell, just to make it out the door without a farewell knuckle sandwich. It happened so much that I finally lamented my plight to the folks. Their solution was to send me to the Y. But karate classes were on Friday nights, the same time as Dukes of Hazard and Dallas. I didn’t see why I had to miss my favorite TV shows on account of some asshole who didn’t like me because I was born with such contemptible features as blonde hair and blue eyes and a baby face. I had no choice in the matter! Finally, the bullying got so bad, the folks sent me to a school in Alhambra. Not that things were much better there. The upperclass kids had their own methods of keeping the weaker kids down. But at least I was getting my ass kicked on a regular basis anymore.
Since then, the folks split up, and I was back in public school. I didn’t want to spend the next four years getting ragged on by a fat bastard like Hector. So I asked Sergio, “What can I do?” He lived down the street from me. His mom bought Avon from my mom. Sergio was truly chingón... to the bone. I once saw him beat the shit out of this guy without even making a fist. Sergio just grabbed him by the ears and slammed the dude’s face into his knee. Over and over, until his pantleg was splattered with blood.
“You gotta duke him, vato. Right in his goofy mouth. One blow. That’s all it takes. The fat boys always go down easy. Trust me.”
I wanted to believe Sergio. He’d always been cool to me. But Hector was twice my weight class. I wouldn’t have gambled on those odds. Even though I never missed an episode of WWF wrestling, I doubted any of the moves I tried out on my little brother would help me when it came to throwing blows for real. Still, I had to do something…
Then, about a week later, back in shop class, Hector was eating sunflower seeds at the next table over. As he cracked them open between his snaggled front teeth, he flicked one of the moist shells onto my arm. I turned and glared.
Hector was all smiles. “Que pasa, holmes? Want some polly seeds?”
Earlier, when I got to class, I had found a strip of nails for the shop nailgun under my table. There were about fifteen nails in a row, like a serrated blade. As I flipped the nails over in my hand, the razor sharp edges nicked my thumb. When a second shell landed on my shoulder, I stood up and felt the sweat of my palm against the strip of nails. “Knock it off, asshole!” I shouted.
But my protests sent Hector into a convulsion of laughter.
“Órale!” He slapped his seat mate’s arm and said loud enough for the whole class to hear: “Check out güero chingón!”
I glanced across the room at the teacher, helping a student file a block of wood. His back was turned, oblivious as ever. It was now or never. I reared back, Fernando Valenzuela style, and chucked the strip of nails right at the fat motherfucker. 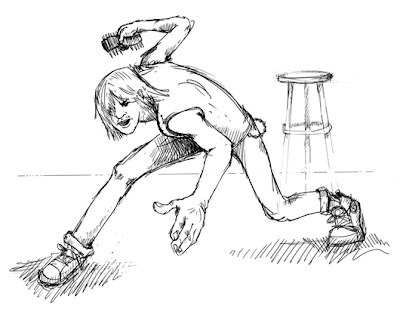 In the red light haze of fury, I heard a wail and opened my eyes. Hector clutched his forearm. A torrent of blood gushed through his fingers, collecting in the sawdust. He looked like a maniacal, laughing clown, his lips forming a smile, even in pain.
I was immediately collared and sent to the principal’s office, where they read me the riot act: “Your attendance record is dreadful, your grades disgraceful, and now this… You’ve left us with no other choice: expulsion.”
I phoned the old man at the Reserve Center and waited across the street, smoking and fantasizing about my new life of leisure. When he pulled up, still in his Army fatigues, he said, “I guess I need to go in there and sort this crap out.”
“It’s no use,” I protested. “They said I gotta go.”
But he went anyway and testified on my behalf. “He’s really a good kid... Things are rough for him at home... his mother’s never around... there’s no discipline at the house... As soon as I get custody, he’ll be living in a different school district, so if he could only finish out the school year...”
Of course they bought it. Nothing like a hard luck tale from a man in uniform. Shit, with all those stripes and chevrons on his shoulders, he outranked most authority figures. My sentence was reduced to a week’s suspension, and for the rest of the year, I had to carry an attendance card to prove that I’d been to class. So there was no more ditching after lunch anymore to hang out with the stoners at 7-Eleven.
But it was a small price to pay. From that day on, thanks to Hector, who transferred over to auto shop, I was known as güero chingón.

From the zine THE PILLSBURY CHOLO 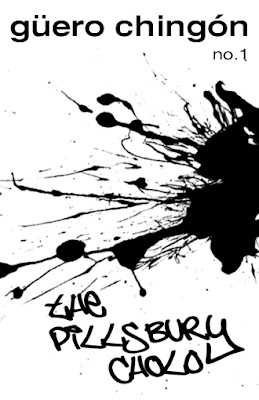 Available from http://www.kellydessaint.com/piltdownlad
Posted by Kell at 4:56 PM

chingón: a bad-ass
san gabriel valley: the suburbs east of downtown los angeles
copyright: All written material on this blog is copyrighted by Kelly Dessaint.

The Olympic Spirit and Other Stories 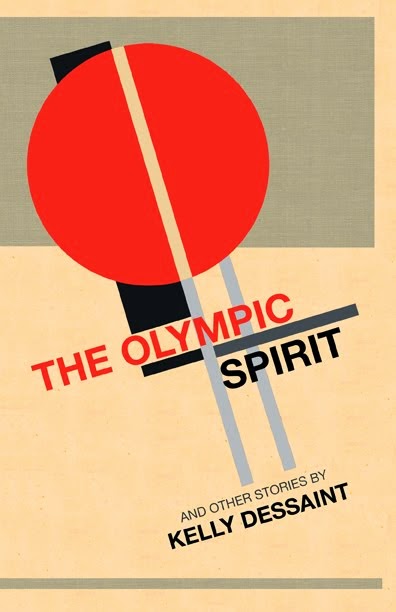 tales from the San Gabriel Valley

add The Olympic Spirit on Goodreads


Visit my We Make Zines page